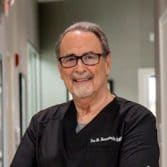 Dr. Ira M. Bernstein was born and raised in Elizabeth, N.J. He is a graduate of Fairleigh Dickinson University School of Dental Medicine. After completing a general practice residency program at French-Polyclinic Hospital in New York City, he practiced for six years in a prestigious group practice in Manhattan. Since then, Dr. Bernstein has practiced general dentistry in New City, NY and Suffern, NY for over 35 years.

Dr. Bernstein was on the teaching staff at a New York City Hospital for many years and has served as a consultant to Nyack Hospital. Dr. Bernstein has special interest and training in cosmetic and reconstructive dentistry. He has done research, authored, and published several scientific papers in national and international dental journals. Dr. Bernstein also holds a United States Patent for an invention used to help patients with jaw problems. He has presented lectures to various dental professional groups, including the Greater New York Dental Meeting. He also has attained Diplomat status in several professional groups and has achieved Fellowship in the Academy of General Dentistry (F.A.G.D.). An avid student as well as teacher, Dr. Bernstein attends numerous conferences and courses. He completed an advanced training program in Comprehensive Cosmetic & Reconstructive Dentistry at the well-known Rosenthal Institute of New York University School of Dentistry. Dr. Bernstein has also completed formal training in the use of Botox and Dermal Fillers. He is a member of the American Academy of Facial Esthetics, where he has served as a mentor and clinical instructor at training courses for other doctors.

Dr. Bernstein is married and has two children and three grandsons. He has been a resident of Rockland County for over 35 years. He is a black belt in Tae Kwon Do, and was a former professional musician. His hobbies now include playing bass guitar and singing lead in a doo-wop /oldies band called “Forever Young”.