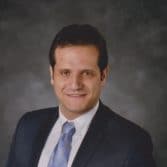 Tamer Barsom grew up in Egypt where he attended dental school at Cairo University and received his BDS. Dr. Barsom then moved to the USA in 2010 and received his DDS degree from the University of Colorado, where he was the class president and had a leading role in the adolescent clinic that the school started. He then went on to New York to complete his residency at New York Presbyterian Hospital in Queens where he received Dr. Benjamin’s Recant Award for Clinical Excellence in Oral and Maxillofacial Surgery.

Dr. Barsom pursued a career in dentistry because he enjoys helping others and creating beautiful smiles. He also had his father, who is also a dentist, to look up to.

Dr. Barsom stays updated with the latest technology and dedicates a lot of his time to ensure he is informed on the newest advancements in all aspects of dentistry. He also enjoys spending time with his family, traveling, playing sports, and enjoying every moment with his wife and sons, George and Philopateer.