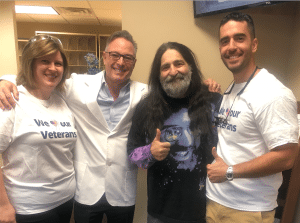 New Hyde Park, NY –  In celebration of Veterans Day, Dental365 hosted its 3rd Annual Day of Free Dentistry for All Veterans on Sunday, November 10th. The event which took place from 9am-2pm welcomed over 70 men and women veterans of the United States Armed Forces.

Dental365 offices—Oceanside and Mount Sinai in Long Island and Galloway Dental, a Dental365 company in Warwick, NY participated in the annual event. Over 25 dedicated employees volunteered their time as a way to show their own thanks and appreciation for our nation’s heroes.

Among the many veterans who received free dental care was U.S Navy Veteran Matt Levine. His incredibly inspiring story led to the decision of Dental365 to honor this special veteran with a once in a lifetime opportunity—a full mouth restoration provided through free care from Dental365.

Before coming to the United States, Mr. Levine was abandoned as a child in Greece. Thankfully, he found his way to a loving home in the United States, and later as a young man enlisted in the U.S Navy as a cook. He frequently entertained his fellow sailors through his love of music and playing the guitar.

Mr. Levine faced even greater hardship later in life with the tragic murder of his son, the suicide of his wife that followed and his own battle with cancer. However, despite these struggles he maintains an optimistic view of life and continues to place the needs of others ahead of his own. Through his passion for music, this amazing veteran has raised over $20,000 for his fellow veterans and veteran causes.

With great thanks to this American hero, Dental365 began the first of many appointments to restore Mr. Levine’s smile and good health. Leading his care is highly regarded cosmetic dentist, Dr. Ira Koeppel of Koeppel Dental Group - A Dental365 Company. Dr. Koeppel saw Mr. Levine for the first of many appointments on Sunday at the Mount Sinai office.

Military veterans like Matt Levine face major roadblocks in access to dental care. Only 15% of the 20 million veterans in the United States qualify for Veteran Administration dental benefits.

Veterans are deemed ineligible for coverage unless they are 100% disabled, have a service-related dental injury or were a prisoner of war. Without access to adequate dental care our nation’s heroes are facing serious, even life-threatening medical conditions.

The military veterans who visited Dental365 on Sunday were incredibly grateful to the company for their gracious hospitality. One patient said, “Today I had the best experience I have ever had in a dentist’s office. Their special care for veterans today was over the top…. As a vet who was proud to serve, it was good to see how Dental365 staff is willing to give up their Sunday to help veterans and show how they care.”

“It’s incredibly humbling to be given the opportunity to give back to the extraordinary men and women who have served this country. I am grateful to these veterans as well as to the Dental365 team who volunteered their time to serve them,” said Scott Asnis, DDS, Founder & CEO of Dental365.

Dental365 was founded on the concept of providing convenient and affordable dental care for the entire family. Through its state-of-the-art facilities it offers modern dentistry services from expertly trained specialists and general dentistry practitioners. Dental365 offices have convenient hours, including nights and weekends, accept walk-ins and offer affordable care and financing options. Dental365 is committed to helping our communities to achieve healthy and beautiful smiles. For more information, please visit GoDental365.com.